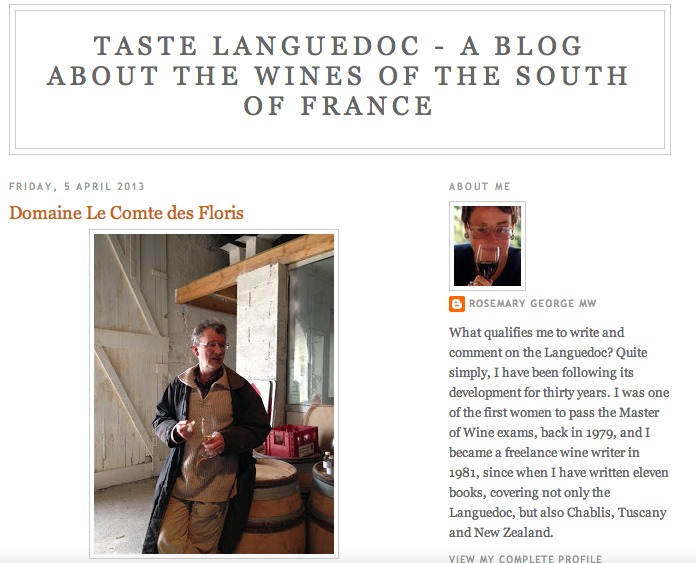 Rosemary came in April in our new cellar in Pézenas city.

« The first time I tasted with Daniel Le Comte des Floris, , it was in a tiny cellar in Caux.  Barrels were squeezed into every available space, and you could hardly move between them.  This time we met in his new cellars in Pézenas, in an old building that used to be a wine cellar some forty years ago. – he is in the process of moving barrels from Caux and was revelling in the space.  The first vintage of the estate was 2001, with seven hectares, of Marsanne, and Carignan Blanc for whites, and Grenache, Syrah and Carignan for reds, and subsequently Daniel has planted small plots of Roussanne and Mourvèdre.

First we tried some barrel samples of the 2012 vintage.   Daniel learnt his winemaking in Burgundy so very much follows the classic Burgundian practices of fermentation and élevage in oak, with a malo-lactic fermentation and some bâtonnage.  And he experiments with different picking dates.  For his Marsanne, there were two pickings, four days apart in 2012, and for the old Carignan vines three pickings, spread out between 10th and 25th September.    It has been as late as mid-October, but to no great effect.    However, Daniel is adamant that you must not do the same thing every year.  It must not become routine.   The cask sample of Marsanne was subtle and textured with white blossom while the Carignan was fresh with some herbal notes and good acidity, which is a benchmark characteristic of Carignan, and explains its renewed success in the Midi.   The Roussanne was full of nuances and with layered flavours, and more acidity than the Marsanne.
A pure Grenache grown on Villefranchien pebbles was quite discreet on the nose, with some cherry liqueur fruit, and a long silky palate, but with a structured finish.  Daniel wants less extraction and more drinkable wines. The tannins were quite firm, but not immediately obvious.   The cuvée also included 20% Carignan, which would lower the alcoholic degree.  He has also made a cuvée of whole bunches, with a little Syrah and Carignan as well as the Grenache.  It was more expressive on the nose, with a sturdier palate, more peppery with firmer tannins, and some freshness.
Next came some Syrah, Cuvée Carbonifère which was quite closed and peppery, and even more so on the palate.  Daniel explained that the vineyard was in the hills outside Gabian, so in a cooler, windier site, resulting in a harvest fifteen days later than around Pézenas.  The wine had structure and length, with a fresh finish.
Daniel used to make a Carignan Noir, Cuvée Basaltique, but has so little Carignan that it is now included in his Syrah.
2011 Mourvèdre, again a barrel sample, from an old barrel,  was quite perfumed, with red fruit, but powerful, with some elegant tannins.  It included 20% Grenache Noir,  And 2011 Grenache Noir, with 15% Carignan, which will probably be bottled just before or after Christmas, was quite deep in colour, with cherry fruit, and a certain grip.  It has spent a year in barrel and is now in vat.  Lovely fruit and great length.   Daniel used to add Syrah to his Grenache, but it tended to dominate the cuvée which he does not want.
2011 Syrah, Cuvée Carbonifère, with 15% Carignan, was quite deep in colour.  It smelt riper and more perfumed, with more tapenade notes than the 2012, and was more tannic and fuller in the mouth. 2011 and 2012 were fairly similar years for Daniel, whereas most people had a much smaller crop in 2012, as the weather was bad at flowering.

Daniel then talked about his top cuvée, Homo Habilis and we tried the 2010, which is given three years ageing, two in barrel and one in vat.  It is a blend of 40%  Syrah, with equal parts of Grenache and Mourvèdre.  It was made for the first time in 2005, but not put on the market until 2009 – the succeeding vintages have been 2006, 2009 and 2010.  This 2010 was deep in colour, and firm and structured – Daniel was adamant that the oak must not dry the fruit – it was long and powerful, but for my taste buds less original, with less of a sense of place.  He then made an interesting observation about buying barrels, which he now gets second hand from a vigneron friend in Burgundy – and the barrels are better quality than those he was buying new, even though he was asking the cooper for the same specification.  Conclusion: the coopers decide who they sell their better barrels to – and Bordeaux and Burgundy are definitely higher up the pecking order than the Languedoc.

And then we adjourned to Daniel’s cheerful wine bar on the avenue Jean Jaurès for some tasting from bottle.  And here we were in for a  treat as he had pulled out some older vintages.
2011 Arés Blanc, Coteaux du Languedoc – 15.00€
Two parts Marsanne to one part Carignan A little colour.  Some herbal hints of the nose and a touch of oak.  White flowers on the palate, some acidity.  Quite rounded herbal notes with lots of nuances.  Not quite ready.
2010 Arés blanc.
A little more golden in colour.  A more restrained but fuller nose,  and a much fuller palate.  Richer and more rounded, and ready.
2011 Lune Blanche, Coteaux du Languedoc – 21.00€
Pure Carignan Blanc   – A little colour.  Restrained nose; more mineral and floral than the Arés.  And an explosion of fruit in the palate.  Rounded ripe and floral, with a firm streak of acidity.
2010 Lune Blanche
A little more colour.  Some herbal, mineral notes  on the nose, and even more so on the palate, with lovely minerality.  Firm and structured with good acidity, but a rich palate with lots of nuances and depth.  Evolving  beautifully.
2008 Lune Blanche
A little deeper colour. Quite a honey nose, with some herbal notes.  Layers of flavour on the palate.  Honeyed with a dry finish.  A touch of maderisation, but nicely so.
2003 Lune Blanche – The year of the heat wave  – Rich colour.  Rich and herbal, with mature notes that made me think of white Graves , or even Australian Semillon, with lanolin notes.  Very good acidity, with lovely body; rich and mature with lots of nuances.
2002 Lune Blanche
A wet year, Daniel reminded us. Mature colour.  Herbal mineral notes.  Lot of acidity.  Lovely mature toasted notes, very Burgundian with pronounced acidity.  Very intriguing.  Lots of nuances.  Mature, stony and mineral .   Who says white wines from the Languedoc cannot age?  This was a shining example of just how well they do age.
And then we finished the whites with a googly – a magnum without any label or clue to provenance.  I thought it had achablisien note and Daniel decided that it was an experimental wine that he had made in his bathtub when he was learning his winemaking in Beaune in 1996! It definitely tasted Burgundian rather than Languedocien.
And now for the reds:
2011 Six Rats Noirs – 10.00€
Mainly Syrah, 70%, with some Grenache and Carignan.  Daniel explained that he makes two cuvées of this wine, one with some sulphur and one without.  Neither is fined or filtered, and a tiny amount of sulphur is added to one vat after the malo is finished.  We tried the one that is given a couple of grames of sulphur after the malo, to make it more stable.  I found it quite confit, heavy and solid.
2010 Cuvée Carbonifère,  Coteaux du Languedoc – 15.00€
Syrah grown on schist.   Deep colour; quite solid, rounded and rich on the nose, and on the palate quite dense, confit  and sturdy,  but with some supple tannins and a warm finish.
2007 Cuvée Carbonifère
This has evolved beautifully, with quite a firm elegant nose, and tight knit peppery fruit, with an underlying richness.  Quite firm and intense, with layers of flavour and character.  Lots of nuances.
2002 Cuvée  Carbonifère
Deep but developed colour; quite dry and leathery on nose and palate, a hint of oxidation, but an underlying richness.  It was beginning to decline but was by no means dead.
2010 Cuvée Villefranchien, Coteaux du Languedoc  – 15.00€
Grenache with 20% Carignan.  Daniel described 2010 as une belle année, and balanced like 2007.  Bright colour. Ripe cherry fruit on both nose and palate,  Ripe fruit with some lovely spicy fruit.  A streak of tannin and nicely textured.
2005 Cuvée Villefranchien
Grenache, with 10 % each of Syrah and Carignan.  Deep colour;  a hint of reduction on the nose.  Quite rounded ripe cherry fruit on the palate.  Quite dense rich and ripe.  The blend includes 70% whole bunches, which gives a certain chunkiness to the wine, with some tannin.  It had quite a rich finish, tasting more than 14˚.
2002 Cuvée Villefranchien
Grenache with a little Syrah and Carignan.  Surprisingly this was not as evolved as the 2005 and I much preferred it.  A little colour development.  Quite a closed nose.  Rich but elegant on the palate, with some red fruit and hints of sous bois.  A delicious mouthful of flavour, with nuances of flavour and a lovely evolution and length.     A beautifully example of the ageability of the Languedoc.
2009 Homo Habilis, Coteaux du Languedoc  – 22.00€
Syrah – 50%; Mourvèdre 25% Grenache 25% – and bottled just three weeks ago.  Quite a firm tight knit youthful nose – firm tannins on the palate; structured and needing time. A vin de garde.

2006 – Homo Sapiens, Coteaux du Languedoc
This is Grenache dominant – hence the different name.  One day Daniel is planning Homo Erectus, which will be based on Mourvèdre.  Deep colour; quite a solid nose, quite firm; and on the palate quite rich and chocolatey, with some red cherries, with both tannin  and acidity.  Still very young and needing time.  I also found it more ‘international’ with quite positive oak.
It was a great tasting, but time was running out, so we declined offers of Cartagène, for which Daniel is developing a solera system over ten years.  That would be delicious.   And Catherine Le Conte des Floris will be showing their white wines at a tasting of white Languedoc wines at the Maison du Languedoc in London next week.  Sadly I shall have to miss it.   But if you are going to that tasting, please don’t miss the opportunity to try Daniel’s wines.  His white wines are particularly original.

You can find the original article on her famous blog :